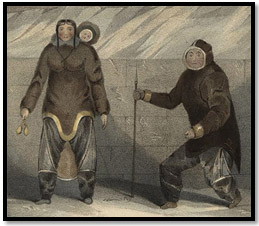 Back, George, Sir,. Narrative of the Arctic land expedition to the mouth of the Great Fish River : and along the shores of the Arctic Ocean in the years 1833, 1834, and 1835. Rutland, Vt: J. Murray, 1836. Subjects: Northwest Canadian; Arctic regions

Barrow, John, Sir,. A chronological history of voyages into the Arctic regions ; undertaken chiefly for the purposes of discovering a northeast, north-west or polar passage between the Atlantic and Pacific, from the earliest periods of Scandinavian navigation to the departure of the recent expeditions under the orders of Captains Ross and Buchan. London: John Murray, 1818. Subjects: Frobisher, Martin, Sir, ca. 1535-1594; Arctic regions—Discovery and exploration—Chronology; Northeast Passage; Northwest Passage

Barrow, John, Sir,. Voyages of discovery and research within the Arctic regions, from the year 1818 to the present time: under the command of the several naval officers employed by sea and land in search of a Northwest passage from the Atlantic to the Pacific; with two attempts to reach the North Pole / abridged and arranged from the official narratives, with occasional remarks, by Sir John Barrow. New York: Harper, 1846. Subjects: Northwest Passage; Arctic Regions

Beechey, Frederic, William. A voyage of discovery towards the North Pole, performed in His Majesty’s ships Dorthea and Trent, under the command of Captain David Buchan, R.N.; 1818, to which is added, a summary of all the early attempts to reach the Pacific by way of the Pole. London: R. Bentley, 1843. Subjects: Buchan, David, b. 1780; Dorothea (Ship); Trent (Ship: 1818); Arctic regions

Beechey, Frederick William. Narrative of a voyage to the Pacific and Bering’s strait : to co-operate with the polar expeditions: performed in His Majesty’s ship Blossom, under the command of Captain F. W. Beechey … in the years 1825, 26, 27, 28 … . London: H. Colburn and R. Bentley, 1831. Subjects: Blossom (Ship); Voyages and travels—19th century; Oceania; Pacific Ocean; Arctic regions

Burn Murdoch, W.G. Modern whaling & bear-hunting: a record of present-day whaling and up-to-date appliances in many parts of the world, and of bear and seal hunting in the Arctic regions / by W. G. Burn Murdoch; with 110 illustrations chiefly from drawings & photographs by the author. Philadelphia: J.B Lippincott, 1917. Subjects: Whaling; Hunting—Arctic regions; Sealing—Arctic regions

De Long, George W. The voyage of the Jeannette: the ship and ice journals of George W. De Long, lieutenant-commander of U. S. N., and commander of the Polar expedition of 1879-1881. Boston: Houghton, Mifflin, 1883.  Subjects: Jeannette (Ship); Arctic regions; Siberia—Description and travel

Fisher, Alexander. Journal of a voyage of discovery, to the Arctic Regions : performed between the 4th of April, and the 18th of Nov., 1818, in His Majesty’s ship Alexander, Wm. Edw. Parry, Esq. lieut. and commander / by an officer of the Alexander. London: Printed for Richard Phillips by G. Sidney, [1819].Subjects: Parry, William Edward, Sir, 1790-1855; Alexander (Ship); Voyages and travels; Arctic regions—Discovery and exploration, British

Franklin, John, Sir,. Narrative of a journey to the shores of the polar sea, in the years 1819-20-21-22 : with a brief account of the second journey in 1825-26-27. London: J Murray, 1829. Subjects: Natural history—Northwest Territories; Scientific expeditions; Northwest Territories—Description and travel—To 1900; Arctic regions

Franklin, John, Sir,. Narrative of a journey to the shores of the polar sea, in the years 1819, 20, 21, 22 / by John Franklin … ; with an appendix on various subjects relating to science and natural history. London: J. Murray, 1823.  Subjects: Natural history—Northwest Territories; Histoire naturelle—Territoires du Nord-Ouest; Northwest Territories—Description and travel—To 1900; Arctic Regions

Franklin, John, Sir,. Narrative of a second expedition to the shores of the polar sea in the years 1825, 1826 and 1827. : Including an account of the progress of a detachment to the eastward .  Edmonton: J. Murray, [1828]. Subjects: Northwest passage; Arctic regions; Northwest, Canadian—Description and travel—1821-1867.

Great Britain. Admiralty. Report of the Committee appointed by the Lords Commissioners of the Admiralty to inquire into and report on the recent Arctic expeditions in search of Sir John Franklin : together with the minutes of evidence taken before the Committee, and papers connected with the subject. London: Printed by Eyre and Spottiswoode for H.M.S.O., 1851. Subjects: Franklin, John, Sir, 1786-1847; Arctic regions

Hall, Charles Francis. Arctic researches and life among the Esquimaux: being the narrative of an expedition in search of Sir John Franklin, in the years 1860, 1861, and 1862. New York: Harper, 1877.  Subjects: Arctic regions; Eskimos; Franklin, John, 1786-1847; United States—Discovery and exploration

Hayes, I. I. The open polar sea : a narrative of a voyage of discovery towards the North Pole, in the schooner “United States.”  New York: R. Worthington, [1869?]. Subjects: United States (Schooner); Arctic regions

Holmes, Lewis. The Arctic whaleman : or winter in the Arctic Ocean; being a narrative of the wreck of the whale ship ‘Citizen’ of New Bedford … together with a brief history of whaling. Boston : Wentworth, 1857 Subjects: Citizen (Ship : of New Bedford); Whaling—Arctic regions; Whaling—History; Shipwrecks

Inglefield, E. A. A summer search for the Sir John Franklin : with a peep into the polar basin / by E. A. Inglefield ; with short notices by Professor Dickie on the botany ; by Dr. Sutherland on the meteorology and geology ; a new chart of the Arctic Sea. London: T. Harrison, 1853.  Subjects: Franklin, John, Sir, 1786-1847; Isabel (Ship); Botany—Arctic regions; Physical geography—Arctic regions; Arctic regions.

Laing, John, surgeon. An account of a voyage to Spitzbergen : containing a full description of that country, of the zoology of the North, and of Shetland Isles, with an account of the whale fishery. / By John Laing. London: J. Mawman; [etc., etc.], 1815. Subjects: Zoology—Arctic regions; Whaling; Spitzbergen—Description and travel; Shetland (Scotland)—Description and travel London: R. Bentley, 1843.  Subjects: Buchan, David, b. 1780; Dorothea (Ship); Trent (Brig: 1811); Arctic regions

MacNaughton, James. The expedition of the “Alert” to the Hudson’s Strait and Bay in 1885 : a paper read before the Albany Institute April 6, 1886. [Albany, N.Y.: Albany Institute, 1886]. Subjects: Alert (Ship); Hudson Bay Region—Discovery and exploration; Arctic regions

Markham, Albert Hastings, Sir,. A whaling cruise to Baffin’s Bay and the Gulf of Boothia, and an account of the rescue of the crew of the Polaris / by Albert Hastings Markham ; with an introd. By Sherard Osborn. London: S. Low, Marston, Low and Searle, 1875. Subjects: Polaris (Ship); Whaling; Arctic regions

McDougall, George F. The eventful voyage of H.M. discovery ship “Resolute” to the Arctic regions : in search of Sir John Franklin and the missing crew of H. M. discovery ships “Erebus” and “Terror”, 1852, 1853, 1854. To which is added an account of her being fallen in with by an American whaler after her abandonment in Barrow Straits, and of her presentation to Queen Victoria by the government of the United States. London: Longman, Brown, Green, Longmans & Roberts, 1857. Subjects: Franklin, John, Sir, 1786-1847; Resolute (Ship); Arctic regions

Parry, William Edward, Sir,. Journal of a third voyage for the discovery of a north-west passage: from the Atlantic to the Pacific; performed in the year 1824-1825, in his Majesty’s ships Hecla and Fury, under the orders of Captain William Edward Parry, R. N. F. R. S., and commander of the expedition… London: John Murray, 1826. Subjects: Hecla (Bark); Fury (Ship); Natural history—Arctic regions; Northwest passage—Discovery and exploration

Payer, Julius. New lands within the Arctic circle : narrative of the discoveries of the Austrian ship “Tegetthoff,” in the years 1872-1874 / by Julius Payer … tr. from the German, with the author’s approbation. New York: Appleton, 1877. Subjects: Tegetthoff (Ship); Franz Josef Land (Russia); Arctic Regions

Peary, Robert E. Northward over the great ice: a narrative of life and work along the shores and upon the interior ice-cap of northern Greenland in the years 1886 and 1891-1897, with a description of the little tribe of Smith Sound Eskimos, the most northerly human beings in the word, and an account of the discovery and bringing home of the Saviksue or great Cape York meteorites. New York: F.A. Stokes, 1898.  Subject: Arctic regions

Ross, John, Sir,. Narrative of a second voyage in search of a north-west passage, and of a residence in the Arctic regions during the years 1829, 1830, 1831, 1832, 1833 by Sir John Ross… Including the reports of … James Clark Ross… and the discovery of the northern magnetic pole. London: A.W. Webster, 1835. Subjects: Victory (Steamship); Natural history—Arctic regions; Northwest Passage

Scoresby, William. An Account of the arctic regions with a history and description of the North whale-fisher… Edinburgh; London: A Constable; Hurst, Robinson, 1820. Subjects: Whaling; Arctic Regions

Scoresby, William. The Franklin Expedition, or, Considerations on measures for the discovery and relief of our absent adventurers in the Arctic regions. London: Longman, Brown, Green, and Longmans, 1850. Subjects:  Sir John Franklin; Northwest Passage

Snelling, William Joseph. The polar regions of the western continent explored: embracing of geographical account of Iceland, Greenland, the islands of the frozen sea, and the northern parts of the American continent … together with adventures, discoveries, dangers and trials of Parry, Franklin, Lyon, and other navigators, in those regions. Boston: Printed for W.W. Reed, 1831. Subjects: Arctic regions

Sutherland, Peter C. Journal of a voyage in Baffin’s Bay and Barrow Straits in the years 1850-1851: performed by H.M ships Lady Franklin and Sophia under the command of Mr. William Penny in search of the missing crews of H.M. Ships Erebus and Terror, with a narrative of sledge excursions on the ice of Wellington Channel and observations on the natural history and physical feature of the countries and frozen seas visited. London : Longman, Brown, Green, and Longmans, 1852. Subjects: Franklin, John, Sir, 1786-1847; Penny, William, Capt.; Arctic regions 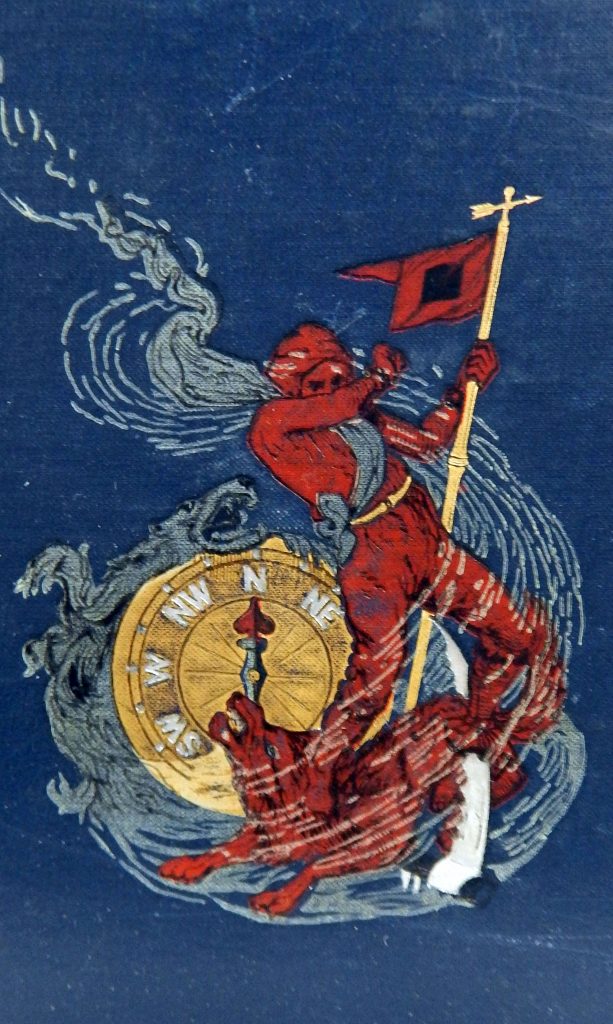 View the online exhibit To the Arctic: Selections from the Collections at Mystic Seaport Museum.