This picture, an exceptional photographic panorama of Greenmanville, the area of Mystic in which Mystic Seaport is found, was taken in 1874 by Everett Augustus Scholfield. 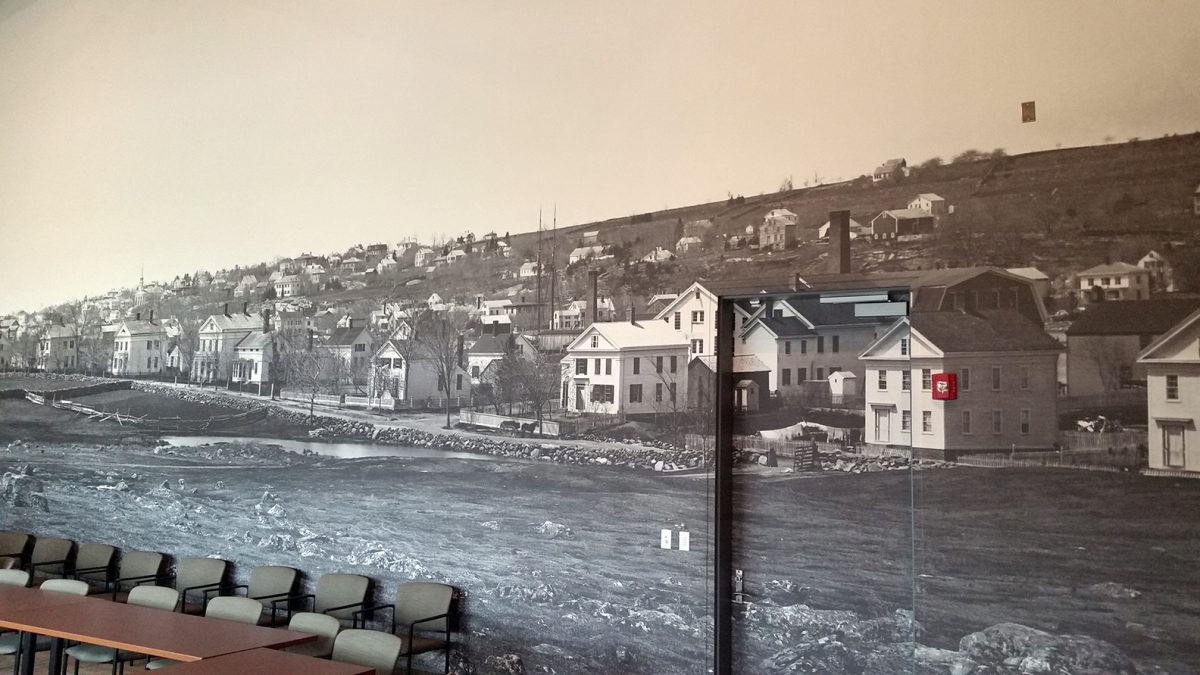 With the opening of the new Thompson Exhibition Building at Mystic Seaport, a new era in exhibiting has certainly dawned on the Museum. The 5,000 square foot exhibition space will play host to some extraordinary displays for years to come. However, the gallery space is currently a blank slate waiting for its first installation. In the meantime, new Senior VP for Curatorial Affairs, Nicholas Bell, worked closely with the Exhibitions and Collections Departments to make a bit of a splash in two areas of the new building. The first is in the lobby where a 59-foot-wide mural by artist Nikki McClure graces the space above the entry to the new Collins Gallery. The second, pictured below, is located in the new Masin Conference Room, overlooking the Mystic River and is an exceptional photographic panorama of Greenmanville, the area of Mystic in which Mystic Seaport is found.

Scholfield was innovative and artistic and used various processes to produce his images over time. The image above was made from a large glass negative in the collection of the Museum. The negative was produced using the collodion process, a method that had many advantages including being able to produce multiple images from the same negative, unlike a daguerreotype. The detail achieved through the use of this process, and the extended exposure time, is quite impressive. The absence of people in the photograph is explained by that exposure time. In a few areas, “ghosts” can be seen as people move in and out of camera view while the glass plate is being exposed.

Achieving a “clean” picture to print in such a large format was achieved through the magic of Photoshop and the diligence of one of our photographers, Joe Michael, removing every imperfection in the plate that has deteriorated over time. It is a nice touch to ring in the new with a reflection of the past.