When the Packet Ship Leeds wrecked in 1828, Mate George Kurtz rescued one of the ship’s library books.

In 1828 George Kurtz left New York City as the mate of the ship LEEDS on its last voyage as an American packet ship. Kurtz, born in Philadelphia in 1803, had received his seaman’s protection certificate in the port of New York in January of the previous year. The LEEDS had been a Liverpool packet from 1823 until 1828, beginning her career about 5 years after the commencement of the American packet trade. Packet ships were vessels that sailed on a regular schedule, whether they had a full cargo hold and passenger contingent or not.

According to Robert G. Albion in his book Square Riggers on Schedule about the packet trade, the LEEDS lasted only 6 years in packet service after some unusual happenings over the years. Early in her career she was grounded in the Mersey River at Liverpool and only survived because she was so strongly built. Another episode had her Captain discharged for trying to smuggle contraband in a bale of hay. Her final indignity was suffered on Christmas Eve of 1828, soon after she became a London packet. She ran aground in the Thames and was “bilged” according to the Shipping and Commercial List and New York Price Current for February 14, 1829. The March 11 issue of the same paper noted that Captain Sprague had to sell her after the vessel was condemned on January 21st. 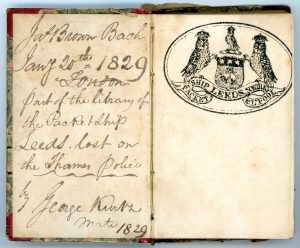 The image above is taken from the inside cover of a book from the LEEDS’ ship’s library. The penmanship belongs to our friend George Kurtz who must have rescued the book the day before the vessel was condemned. There are two unusual things about the image. The first being Kurtz’ use of the word “police” after the phrase “lost on the Thames.” The second is the unusual ship’s stamp on the right hand side. This coat of arms, if you will, of the ship says “Packet Ship Leeds New York and L’pool.” In addition to the triumvirate of owls shown, the shield seems to bear the image of some form of livestock (cow or pig) being carried by a bird of some sort.

Captain Benjamin Sprague of Bridgewater, Massachusetts, had been a packet ship captain for about 5 years prior to his losing the LEEDS. He does not appear as a packet captain afterwards. George Kurtz, however, appears at least once as a captain in 1839 aboard the ship OHIO trading between New York and New Orleans. The book that was saved by George is The Percy Anecdotes, by Sholto and Reuben Percy, published in New York in 1822.

The name at the top of the page, James Brown Bach, is a bit of a mystery. He may have been another crew member, but that is unknown at this point. However, it seems likely that he is the James Brown Bach who was born in 1808 and died when he was only 33 years old. His name appears on a passenger list returning to New York from London in October of 1829. His son, James Brown Bach, would go on to be a pioneer in American baseball in forming the Niagara Club in Buffalo, New York, in the mid-1850’s according to the book Base Ball Pioneers, 1850-1870.

The Percy Anecdotes was brought to the G.W. Blunt White Library by one of our many dedicated volunteers.