In October of 1859 Captain James Hamilton took over command of the CHARLES W. MORGAN for a voyage to the Pacific and the Arctic Oceans. Along the way the MORGAN made stops in Chile, Hawaii and Japan among other places. The MORGAN left New Bedford a few weeks before John Brown’s famous raid on Harper’s Ferry and returned home, surprisingly safely, during the midst of the Civil War in 1863, nearly four years after departing. When she left, James Buchanan was president. When she returned, Abraham Lincoln was dealing with the recent defeat of Union forces at Chancellorsville where total casualties for both sides totaled more than 30,000 men.

Prices had escalated during the war and the MORGAN’s return grossed over $165,000, making it the MORGAN’s most successful voyage of her career. The MORGAN, however, did have a few casualties of her own during the voyage. A journal kept on board by Hamilton notes that seaman Francis Lacock drowned after being dragged out of a whaleboat, the second mate had a finger amputated by the captain after a whale gun exploded, and a boatsteerer, M.A. Brady, fell from the mast top and broke his jaw in multiple places.

The image here represents one of the ship’s papers for the 1859-63 voyage. The G.W. Blunt White Library also holds Hamilton’s journal of the voyage. This paper, a four-language sea letter (17″ by 22″) was recently purchased at auction and carries the signatures of President Buchanan, Secretary of State Lewis Cass and Deputy Director of Customs, James Taylor, listed as the Notary Public. The seal of the United States can be clearly seen in the detail image. 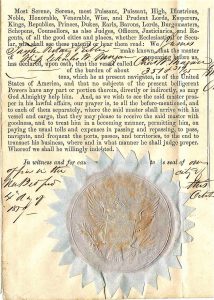 The following description of a sea letter is excerpted from Doug Stein’s American Maritime Documents:

“The term ‘Sea Letter’ has been used to describe any document issued by a government or monarch to one of its merchant fleet, which established proof of nationality and guaranteed protection for the vessel and her owners. However, it is the Sea Letter used by the United States after 1789 that is of particular interest here.

The 1822 edition of The Merchants and Shipmaster’s Assistant described the Sea Letter as a document which ‘specifies the nature of the cargo and the place of destination,’ and says that is was only required for vessels bound to the Southern Hemisphere… In 1859 the document was defined as part of the ship’s papers when bound on a foreign voyage, ‘…it is written in four languages, the French, Spanish, English, and Dutch, and is only necessary for vessels bound round Cape Horn and the Cape of Good Hope.’

The statement within the document conveys in part that the vessel described is owned entirely by American citizens, and requests that all ‘Prudent Lords, Kings, Republics, Princes, Dukes, Earls, Barons, Lord, Burgomasters, Schepens, Consullors…’ etc., treat the vessel and her crew with fairness and respect. The signatures of the President of the United Stated, the Secretary of State, and the customs collector appear, usually in the middle portion of the document. Sea Letters are mentioned in the formative maritime legislation forged by the new Federal governments. Like passports, they provided additional evidence of ownership an nationality, but the criteria by which a shipmaster utilized one document over the other is not completely clear. It was explained at the time that both documents were ‘rendered necessary of expedient by reason of treaties with foreign powers,’ a statement which suggests that certain nations required a particular document because of existing agreements with the United States.

In any case the Sea Letter was valid for only a single voyage, and a bond does not seem to have been required. Neither was it to be returned to the collector when the voyage was completed. Indications are that, as the years progressed, Sea Letters were being used more often by whaling ships than by merchant vessels, perhaps because American whalers fished in areas where this document was preferred as proof of national origin.”

Mystic Seaport continues to collect such documents through purchase and gift on a regular basis. This particular paper was a nice find for the collection and we look forward to making additional discoveries in the future.