A crossing-the-line ceremony is something that many naval and merchant seamen have experienced. Traditionally, when a vessel passes over the equator, anyone aboard that is also crossing for the first time is initiated into the brotherhood of shellbacks by King Neptune himself, attended by his lovely court, of course. Duckings, being “shaved” with giant implements, dosing with some sort of medicinal potion and being smeared with tar are just some of the events that might take place during a mandatory appearance at the good King’s court. Nowadays, even certificates of such a graduation into the ranks are made available to the “lucky” inductee. Below is one such certificate from 1982 issued to the recipient by Neptunus Rex and Davey Jones. 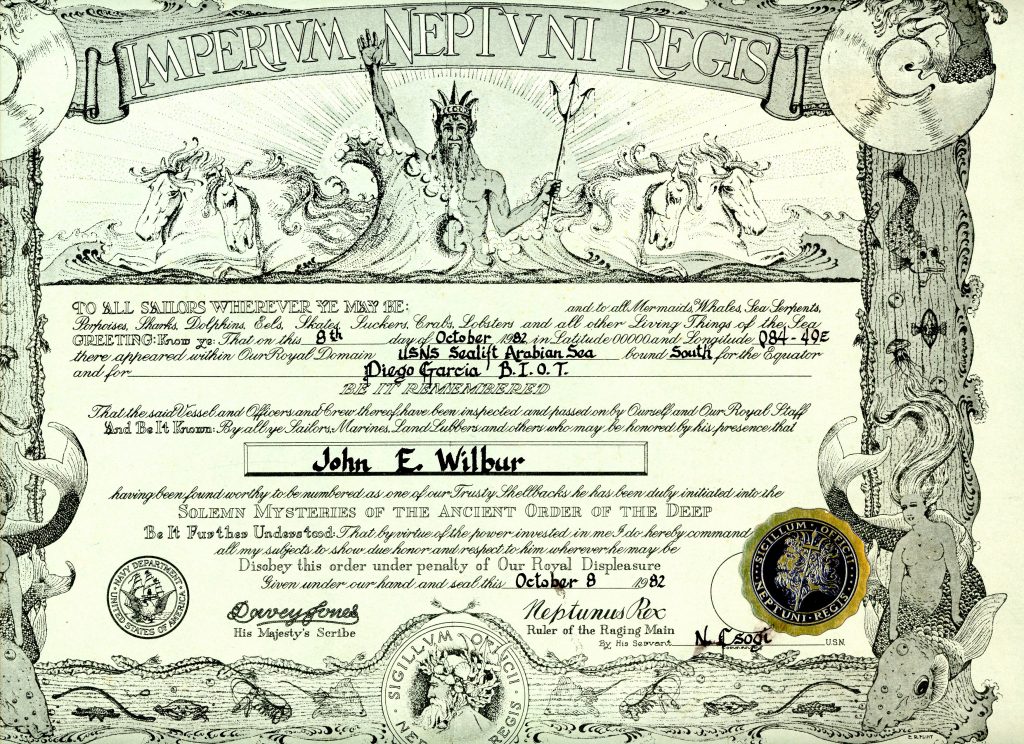 However, the tradition is a long one going back centuries. Looking back, we find the accompanying image in a rare book in the G.W. Blunt White Library’s collection at Mystic Seaport. “Crossing the Line” is from A Picturesque Voyage to India : by the Way of China, by Thomas Daniell and William Daniell published in London in 1810. Imagine the surprise of the passengers aboard as Neptune himself makes an appearance on deck to welcome new members to his company. 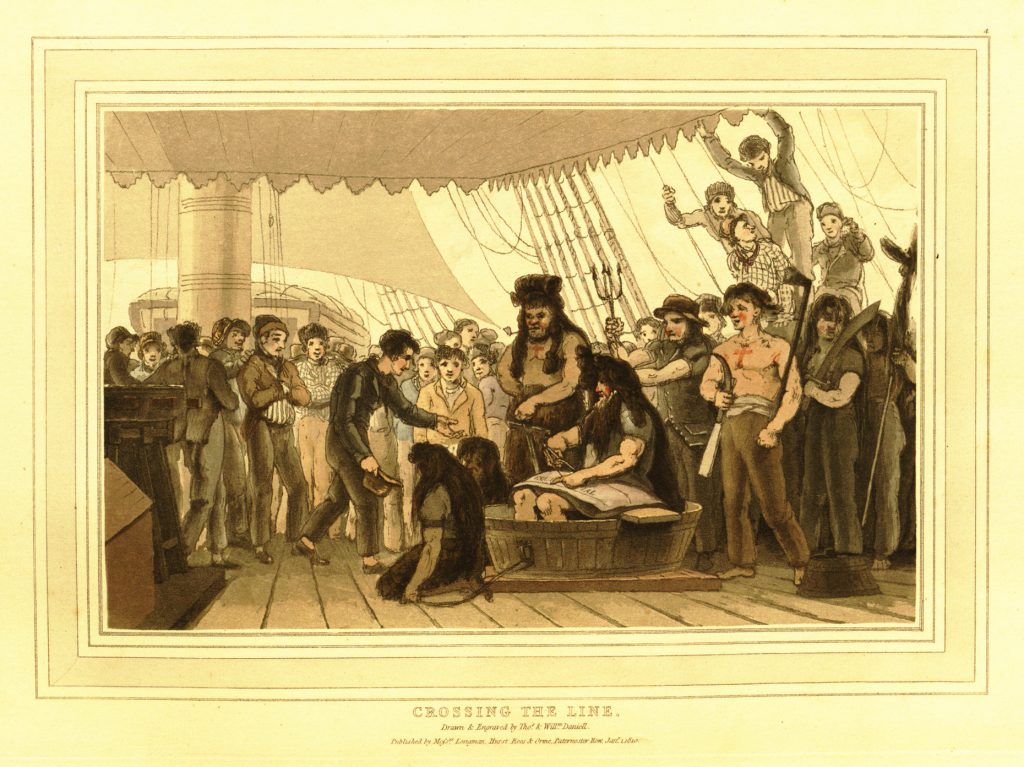 The following transcript from a journal 76 years later, in 1886, lays out the scene in dramatic fashion as the naval ship makes its way across the equator in the Atlantic Ocean. The author and inductee,William E. Safford, an ensign aboard the USS VANDALIA, appeared in an earlier post. The manuscript journal is part of the collection of the G.W. Blunt White Library.

As we were to “cross the line” preparations were made for receiving Neptune on board; and for initiating all those on board who had not been across the line before. At half past nine in the forenoon, a grotesque procession issued from under the top gallant forecastle, headed by an old man with a long white beard and hair, wearing on his head a glittering crown and bearing in his hand a trident.  He was all bedewed with the salty spray of the ocean from which he had just risen. Seated on a chariot drawn by ocean nymphs was his blushing bride Amphitrite whose fair curly locks were surmounted by a diadem.  In her arms she held little Rhodi, her baby, wrapped up in her sea-blue mantle to screen her from the vulgar gaze of mortal eyes. The royal couple were attended by their Lord High Chamberlain and in their wake followed the barber and hairdresser to his majesty, his court physician, four Knights of the bath, and a train of attendants.

They were received by the officer of the deck and the Executive officer on the weather side of the quarter deck; and a number of officers who had not before been in his Majesty’s realm were presented with imposing ceremonies to both the King and his royal spouse by the Lord High Chamberlain. As they expressed their appreciation of the honor conferred upon them, and begged his Majesty that he would deign still further to add to their happiness by accepting some slight refreshment for himself and his retinue after their long journey from their palace beneath the sea; the gracious sovereign not only accepted the hospitality tendered him, but presented the officers with the following credentials, headed by a portrait of his majesty sitting in a shell and drawn over the blue sea by a pair of classic dolphins:

“Our Realm surrounds the World”.

Know all men by these presents that Ensign W.E. Safford, U.S.N. having crossed our Realm on board the U.S.S. “Vandalia” in the service of his country and for honorable purposes and having complied with all the usages rules and customs in so visiting us, he is now declared

“Free of the Ocean” Given under our hand in the Reign of wind and water on this the 23 day of September 1886.

After giving us our diplomas, the procession continued on its way, stopping at the bridge on the lee-side (port) of the deck.  Here a throne had been erected for Neptune, Amphitrite remaining on her chariot with her baby in her arms.  Just forward of the bridge a reservoir had been constructed out of a large tarpaulin (an awning coated with tar) by stopping its margin up to a height of about four feet above the deck, and allowing it to sag down in the middle.  This was nearly filled with water.  Just off of this, to the right of the throne was a stool mounted on a box.

Those of the crew who had never before crossed the Equator were brought in succession before the throne.  Neptune waved them aside, and Amphitrite still seated on her chariot and with a pipe in her mouth, made them kiss the baby, whose face had been coated with a mixture of shoe-blacking and grease.

They were then seated in a chair where the court dentist examined their teeth with a huge pair of forceps and the court physician administered to them some physic from a bottle armed with a bunch of needles which stuck into their faces. They were then placed in the barbers chair on the margin of the pool; their faces were lathered with a disgusting black sticky mixture and then scraped by an enormous razor of wood. Suddenly they were tumbled heels over head into the pool and after having been held under for a short while by the Knights of the bath were allowed to clamber out, in the sorriest plight one could well imagine. Some of the victims went through the ordeal good naturedly.  Others hid themselves in different parts of the ship but were ferreted out by the detectives of the court. One coal-heaver afforded much amusement by trying to escape into the fore-top. Before he was half way up the rigging he had two of the police hanging from his legs and a number of others forcing him down from above. When finally dragged to the chair, he submitted with very bad grace, grappling with the barber and trying to pull him into the pool.  He was vigorously smeared with the lather, receiving an extra dose in the mouth, and was tumbled writhing and kicking into the water receiving an extra ducking for his resistance. When he emerged from the water he fairly roared like a wild beast.

Every one of the crew on board ship who had not before crossed the line underwent the initiation, the majority with very good grace. The ship’s corporal insisted that he had been across, but being brought before the board of inquisition, he could not bring forward sufficient evidence to convince them. Of the entire marine guard but a single man had before crossed the line—and beginning with the Orderly Sergeant, they all submitted to the ordeal. Taking the ceremony altogether it was very amusing and it did much to relieve the monotony of our voyage. No real indignity was offered the subjects of initiation.  After every man had been declared a son of Neptune, the chief actors in the function proceeded to unmask themselves. Neptune and Mrs. Neptune tore off their beard and tresses of manilla, the baby proved to be a swab dressed for the occasion, and the various retainers jumped into the pool and began to scrub off the lamp-black and vermillion with which their faces were liberally smeared. Mrs. Neptune’s face especially was a work of art, so delicately were her cheeks tinted.

Crossed the line between 11.30 and noon.

Temperature between 78 and 80 F.  Saw a number of flying fish.  Scarcely realize that we had passed under equator from delightful trip.”

Ensign Safford’s journal is a study in keen observation, especially of the natural world. Here his ability to examine and understand a situation does us well with his description of a ceremony that is legendary in nature yet rarely described in full. And as can be seen from his description and the image from 1810, the ceremony had changed little to that point.

Thank you Paul Goodwin for a faithful transcription.