While sailing from Boston towards the Northwest Coast beginning in 1821, the IDA was standing a mile or so off of Valparaiso on the 20th of November 1822, when : “At 11 P.M. We was suddenly alarmed by a violent shock that effected the ship as if she had struck the bottom, all hands sprung on deck and cried out the ship ashore… 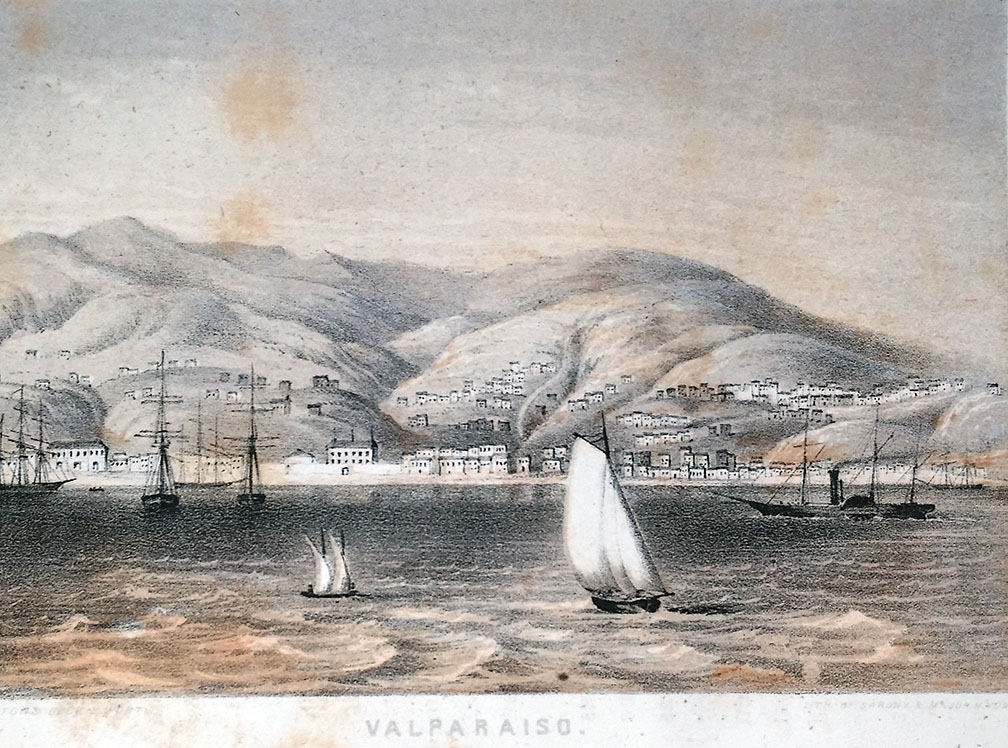 The Museum recently acquired a logbook of the Boston ship IDA from 1821 to 1823. The IDA was built in Amesbury, Massachusetts in 1816, and at 115 feet in length and 28 in breadth, she was almost the exact size of the Museum’s own CHARLES W. MORGAN. The following events in Valparaiso, Chile in November of 1822 were the last recorded for the ship, except for a note in the back saying the ship was sold in March of 1823. The customs house in Boston lists the documents for the ship as being returned after the vessel was sold in Buenos Aires in November of 1823.

While sailing from Boston towards the Northwest Coast beginning in 1821, the IDA  was standing a mile or so off of Valparaiso on the 20th of November 1822, when : “At 11 P.M. We was suddenly alarmed by a violent shock that effected the ship as if she had struck the bottom, all hands sprung on deck and cried out the ship ashore, we tried the pumps and hove the deep sea lead, found no water in the ship, nor bottom with 50 fathoms of line, it so much resembled a ship drawing over a coral bank that I was induced to heave the lead, but on reflection knew it was impossible for her to have struck any bottom in so heavy a sea as was on at the time without bilging the bottom in. I then thought of a wreck of a vessel but lastly I imputed it to an earth quake.” Prior to the earthquake, on November 18, the captain had sent a boat ashore at the mouth of the River Maipo at San Antonio, and with much relief  brought the boat back aboard on November 22. “They got on board and informed us that there had been a heavy shock of an earth quake on shore and that Valparaiso had been nearly destroyed and had lost 23 lives in the fall of a Castle.  St. Jago & several of the towns in the interior had suffered severely the inhabitants about the sea coast fled to the mountains for safety fearing that the sea would flow in upon them, animals of every kind on shore appeared to be affected by the shock.”

Maria Graham, the wife of a British naval officer residing in Valparaiso during 1822 wrote of the same earthquake and its stressful effects on animals as well in her published journal. “The house received a violent shock, with a noise like the explosion of a mine. I sat still; and Mr. Bennet, starting up, ran out, exclaiming, “An earthquake, an earthquake! For God’s sake follow me!”…The vibration still increasing, the chimneys fell, and I saw the walls of the house fall open.” She continued, “The motion of the earth changed from a quick vibration to a rolling like that of a ship at sea.” As to the animals, “Amid the noise of the destruction before and around us, I heard the lowings of the cattle all the night through; and I heard, too, the screamings of the sea-fowl, which ceased not until the morning.”

While this was one of a number of major earthquakes in the same exact area over the last 200 years, there are few recollections in English of the quake, so this particular view by a sea captain may very well be unique.

This area of Chile is regularly wracked by earthquakes and has seen some of the strongest in history. Thirteen years after the earthquake described above, another earthquake to the south of Valparaiso in Chile was described by Charles Darwin. He arrived in Talcahuano about two weeks after the earthquake and visited Concepcion, the site of the quake. The chart of Valparaiso Bay below was surveyed and drawn by officers of H.M.S. BEAGLE at that time in 1835.